Oswald the Lucky Rabbit is one of the first animated cartoon characters made by Walt Disney and Ub Iwerks for Universal Studios between 1927 and 1928, then produced by Charles Mintz and Walter Lantz from 1928 until 1943. 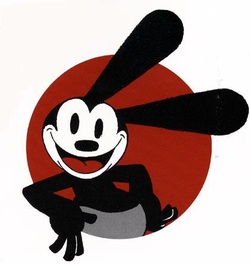 During his days under Disney, Oswald was one of the first cartoon characters that had personality. Not only were gags used, but his humor differed in terms of what he used to make people laugh. He presented physical humor, used situations to his advantage, and frustration comedy best shown in the cartoon The Mechanical Cow. He would make use of animal limbs to solve problems and even use his own limbs as props and gags. He could be squished as if he was made of rubber and could turn anything into tools. Sadly, the one thing he could never use because of an overwhelming fear was banana peels. His distinct personality was inspired by Douglas Fairbanks for his courageous and adventurous attitude as seen in the cartoon short "Oh What a Knight". 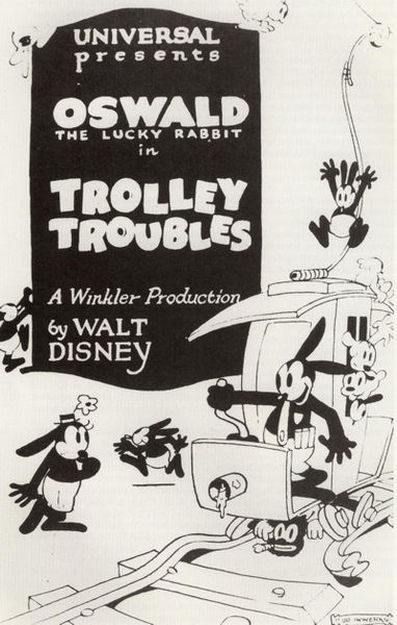 In 1927, because of cost and technical restrictions, Disney and his chief animator Ub Iwerks decided to end their work on the Alice Comedies series in search of new creative opportunities. Coincidentally, Universal Studios wanted to get into the cartoon business and needed a cartoon character of its own. So Disney's distributor Charles Mintz told Disney and Iwerks to create a new character they could sell to Universal. Wanting to make cartoons with an all-animated look, Disney signed a contract with Universal Studios leading to the creation of Oswald the Lucky Rabbit and Universal's first cartoon series.

Disney chose to make the character a rabbit since there were so many animated cats (Felix the Cat, Krazy Kat) at the time. Universal was given the right to name the rabbit and it selected a name out of a hat.

The first Oswald cartoon, Poor Papa, was rejected by the Universal studio heads for its poor production quality and the sloppiness and age of Oswald. Disney, together with Iwerks, decided to create a second cartoon titled Trolley Troubles featuring a much younger, neater Oswald. The short, released on September 5, 1927 officially launched the series and proved to be Disney's greatest success to date. Poor Papa was finally released a year later renamed Mickey's Nightmare. Oswald the Lucky Rabbit became Disney's first major hit in 1927, rivaling other popular cartoon characters, such as Felix the Cat and Koko the Clown.

In the spring of 1928, Disney traveled to New York City in hopes of negotiating a more profitable contract with his producer Charles Mintz. But as economic problems were apparent at the time, Mintz figured Disney should settle for a 20% cut, although large turnarounds were promised if the studio's finances showed considerable growth. While his fellow animators remained at Mintz's studio, Disney decided to quit his job and therefore leave the character he created. On his long train ride home, he came up with an idea to create another character, and retain rights to it. He and Iwerks would go on to develop a new cartoon in secret, starring a new character which would soon become the most successful and popular cartoon character in film history and later become the foundation of a global entertainment empire. The first Mickey Mouse cartoon to be filmed, Plane Crazy, was produced as a silent in the summer of 1928 although not released until it got a soundtrack after the first Mickey Mouse film with a synchronized soundtrack, "Steamboat Willie", reached the screen that fall, became a major hit, and eclipsed Oswald. 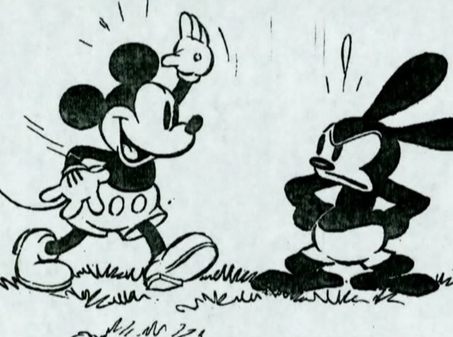 In February 2006, Disney CEO Bob Iger initiated a trade with NBC Universal in which a number of minor assets, including the rights to Oswald, were acquired by The Walt Disney Company in exchange for sending sportscaster Al Michaels from Disney's ABC and ESPN to NBC Sports. At the time, ABC had lost its contract for NFL broadcast rights, and despite recently signing a long-term contract with ESPN, Michaels was interested in rejoining broadcast partner John Madden at NBC for the Sunday night package. Universal transferred the copyright to the character to Disney, and in exchange, Disney released Michaels from his employment contract, allowing him to sign with NBC.

The deal included the rights to the character and the original 26 short films made by Disney (namely, most of the Oswald films produced from 1927 to 1928). Rights to the Lantz/Universal-produced Oswald films and other related products were not included, and therefore Oswald appears in both Disney releases and in Universal's Woody Woodpecker and Friends collection. Iger had been interested in the property because of an internal design document for a video game, which would ultimately become Epic Mickey. Walt Disney's daughter, Diane Disney Miller, issued the following statement after the deal was announced:

“When Bob Iger was named CEO, he told me he wanted to bring Oswald back to Disney, and I appreciate that he is a man of his word. Having Oswald around again is going to be a lot of fun.”Around the same time, the Kansas City Chiefs and New York Jets made a similar deal, the Chiefs giving the Jets a draft pick as compensation for releasing coach Herm Edwards from his contract. Referring to this trade, Michaels said:

“Oswald is definitely worth more than a fourth-round draft choice. I'm going to be a trivia answer someday." 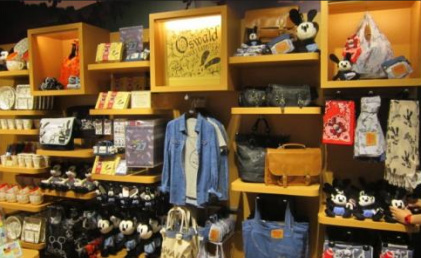 Shortly after the rabbit starred in a series of twenty-six black and white animated silent shorts between 1927 and 1928, he became the first Disney character to successfully sell merchandise: a chocolate-covered marshmallow candy bar, a stencil set, and a pin-backed button. However, Disney lost the rights to Oswald shortly thereafter and the production of merchandise was put to a halt. Not long before Disney regained the rights to Oswald, Universal started marketing the character actively overseas. In 2004 and 2005, Oswald products became popular in Japan, and were primarily made available as prizes in UFO catchers. Typically manufactured by Taito and/or Medicom, these products included puppets, inflatable dolls, keyrings, and watches. They were generally based on a navy-blue version of the original Disney/Iwerks character. Clothing products are also available at Disneyland Paris in Walt Disney Studios Park. In January 2007, a T-shirt line from Comme des Garçons seems to have constituted the first new Disney Oswald merchandise. Following in December was a two-disc DVD set, The Adventures of Oswald the Lucky Rabbit, included in Wave Seven of the Walt Disney Treasures DVD series. Several Oswald collectors' figurines and a limited edition grayscale plush toy appeared shortly after the DVD set's release. The Disney Store also began to introduce Oswald into its merchandise lines, starting with a canvas print and Christmas ornament that became available Fall 2007. A standard-issue color plush toy matching Oswald's appearance in Epic Mickey appeared in late 2010. This was followed by an ongoing roll-out of clothing and other products at the Disney Store, various chain stores, and the Disney California Adventure theme park, including the popular "Oswald Ears" hats (similar style to Mickey Mouse Club caps). Now, Oswald merchandise is booming off the shelves. Mostly in Japan but there is a plethora of items at Oswald's Service Station in California Adventure. 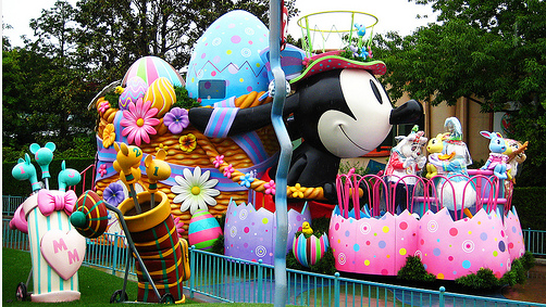 Oswald made his first Disneyland appearance at Tokyo Disneyland on March 31, 2010 as an Easter float. At the Magic Kingdom in Walt Disney World, a poster of Oswald can be seen at the Town Square Theater where Mickey Mouse is available for meet and greets. Also inside Mickey's meeting area, a doodle of Oswald and Mickey can be seen. In 2012, Disney California Adventure park at the Disneyland Resort re-opened with a new entry land called Buena Vista Street, themed to 1920s Los Angeles. Oswald's Service Station is a 1920s gas station (housing a gift shop) located at the north end of the street and features Oswald prominently in its logo. Disney California Adventure also sells Oswald merchandise while next door Disneyland Park offers Mickey Mouse merchandise exclusively. 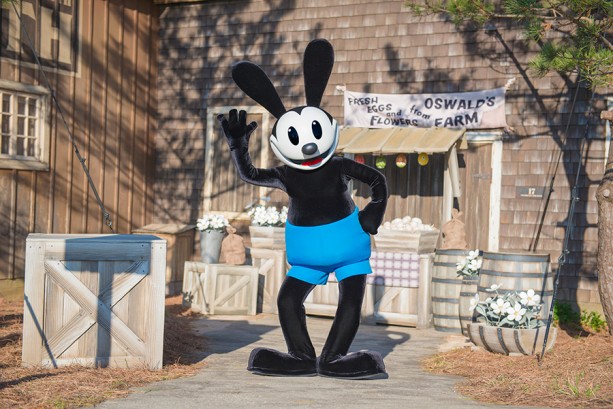 On April 1st, 2014, a new official Oswald costumed character debut and began doing meet-and-greets at Tokyo DisneySea. His meet and greet area is based off Oswa'ds farm where there are cartoony flowers and eggs. 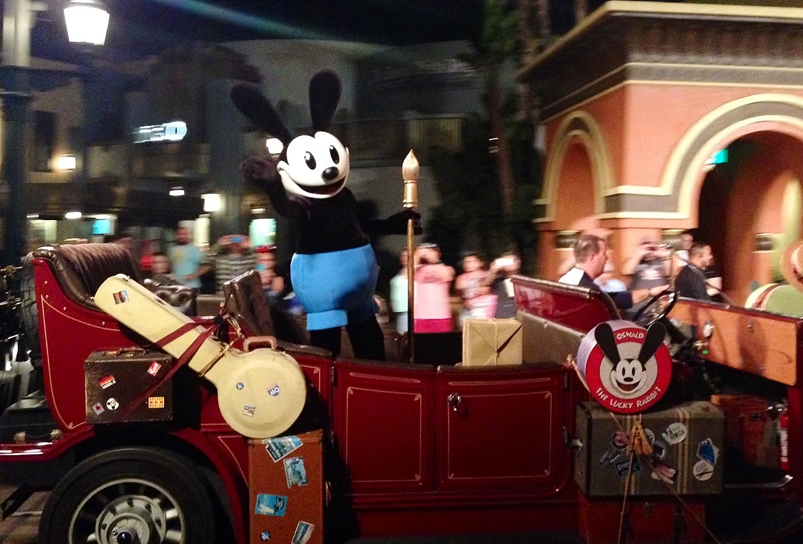 On September 14th, 2014 Oswald made his mascot debut on Buena Vista Street at Disney California Adventure Park. He now roams the sunny side streets near his Gas Station. 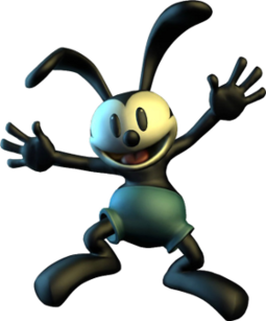 Oswald is one of the main characters in the video game franchise Epic Mickey. The world of Epic Mickey is called "Wasteland" and it is similar to Disneyland but for forgotten Disney characters, including Oswald, who rules the place. Actually, Oswald fashioned it after Disneyland, but he put images of himself in the place of Mickey in the statue with Walt Disney and other places throughout the town. Oswald was the first cartoon character to be "forgotten" and inhabit Wasteland. Oswald dislikes Mickey for stealing his popularity that he felt he deserved. Oswald tries to make Wasteland a better place for forgotten characters, especially his "bunny children" and his wife Ortensia.

The Blot, the main villain of the game, put Oswald's wife in suspended animation by soaking her in thinner. At the end of Epic Mickey, Ortensia is revived by a rain of paint caused by the death of the Blot, Oswald and Ortensia kiss and cuddle. Both Mickey and Oswald have also reconciled, becoming more like true brothers. Oswald accidentally breaks the cork that keeps the Blot in a large glass bottle known as the Jug after finding out that Mickey accidentally ruined Wasteland. The short Oswald cartoon Oh, What a Knight was also included as an unlockable cartoon in the game. The recently discovered short Poor Papa was originally going to be in the game, but couldn't because Junction Point didn't have enough time to scan the short into the game before its release.